Oil lakes can harm the environment. Oil lakes have been created by war, vandalism, poor environmental practices and other factors that are prevalent throughout the world.  These lakes have astonishing volumes of oil that can be evacuated and recycled. They pollute ground water, contaminate nearby ecosystems and harm humans, marine life and animal species. Oil lakes pose serious threats to fresh water and marine environments and affects surface resources and a wide range of subsurface organisms that are linked in a complex food chain, including human food resources.

Spilled oil can harm the environment in several ways, including the physical damages that directly impact wildlife and their habitats (such as coating birds or mammals with a layer of oil), and the toxicity of the oil itself, which can poison exposed organisms.

RET systems are commercial-scale systems that are economically feasible

RET is uniquely positioned to help remedy these environmental disasters. Our team has designed and successfully implemented technologies that can efficiently remediate environmental hot-spots. We are able to employ a wide range of technologies to meet specific client and environmental requirements. The Oil Lake Remediation System can recover and reuse existing hydrocarbon fluids, treat and dispose of liquid and solid non-recyclable waste, and clean-up hazardous, dissolved-phase, petroleum-related soil and water contamination. 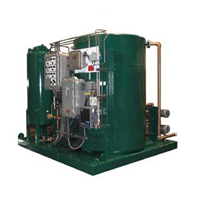 Contaminants removed through this stage:

a. Heavy and light solids – Both heavy and light solids can be removed with the most advanced solids separator on the market.  The system works based on Stokes Law in a unique configuration that effectively utilizes the forces of gravity and friction to achieve unprecedented results. The solids go down the center of the vessel at a high velocity and are thrown to the bottom of the vessel. The carrier fluid changes direction 180 degrees. The velocity slows down so that the solids at a particular size reach their terminal velocity and drop out of solution. The water flow (already stripped of the heavy solids) then enters lamella plates horizontally rather than in a typical up flow or down flow configuration.  The flow through the lamella plates is in a laminar flow condition. The ending result is that the solid separator can handle solid concentrations as high as 60% solids and can remove all of the solids down to < 25 micron particle size (depending on the specific gravity of the solids) and a portion of the remaining solids down to 1 micron particle size. The system is less likely to plug than other clarifiers. The separator internals have no moving parts and it does not require cyclonic separation or flocculants.

b. Heavy oils – Heavy oils and grease (specific gravity > 1) are removed by the same solids separator and generally come out with the solids.

c. Free oils – Free oils (specific gravity <1) are removed in a coalescing separator (can be the same vessel as the solids separator or a separate vessel) using a combination of lamella plates and polypropylene coalescing media. The coalescing media has a unique configuration that provides the maximum surface area and interaction area for coalescing.

Following removal of the solids and oils, the water is then processed through our patented Ferrator treatment system

This will remove any remaining chemical and bacterial contamination, pathogens, pharmaceuticals and heavy metals. The Ferrator treatment system can be used to treat a long list of chemicals, bacteria, pathogens, heavy metals and other contaminants.

Ferrate is a powerful, high valant (FeO4)2- iron molecule that oxidizes process chemicals, disinfects pathogens and scale causing organisms, and coagulants or co-precipitates dissolved and particulate metals; all from a single dose. Most importantly, Ferrate is often the least expensive and most effective treatment option. 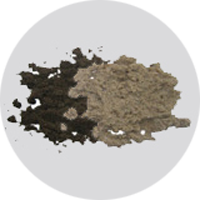 Once the oil lake is empty, the contaminated soil in the area is treated using the RET Soil Remediation System

The RET Soil Remediation System removes hydrocarbons from the effected soil area, recovers those hydrocarbons for forward uses, and returns the cleaned soil back to the original site.

The system is very durable and able to operate in the most demanding situations and environments. A typical process train could process 50 tons per hour. Multiple trains can process 1000’s of tons per day. The system uses a combination of mechanical and chemical technologies that cleans 100% of the contaminants from the contaminated soil.

The process involves separating the contaminant away from the cutting, sand grain or soil, allowing the oil and other contaminants to be collected or remediated. The remaining water and chemical are separated from the contaminated particle and recycled into the treating process. This closed loop system eliminates polluted discharges of water and other wastes, not generating any tailings stream. Clean particles are the end product of this process and are obtained without creating volatile emissions or the use of solvents. This is an energy and water efficient process with low capital costs.