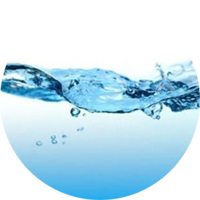 Originally designed for the oil and gas industry, RET’s Wastewater Treatment (WWT) Systems are unparalleled by competitors in terms of water purification and cost. The “Mobile” System can treat up to 100 gallons per minute (22.5 M3/hr)** of water with complete system redundancy thus allowing the system to operate 24 hours per day, 365 days per year.

**Multiple systems in parallel can treat millions of gallons per day.

Wastewater is pumped into the system using an air diaphragm pump to avoid forming oil emulsions and for processing of solids. The System can handle solid concentrations up to 60% for specific operating durations. The suction of the pump pulls water and solids through a screen to remove large rocks and objects. If the water is already under pressure and has already been screened through a ½” mesh strainer then the pump and inlet screen may be eliminated.

The clean water coming out of the System still contains brine. Some of the calcium is removed by the ferrate system but most of the brine goes through the system. A proprietary reverse osmosis system is then added to remove the brine for desalination. 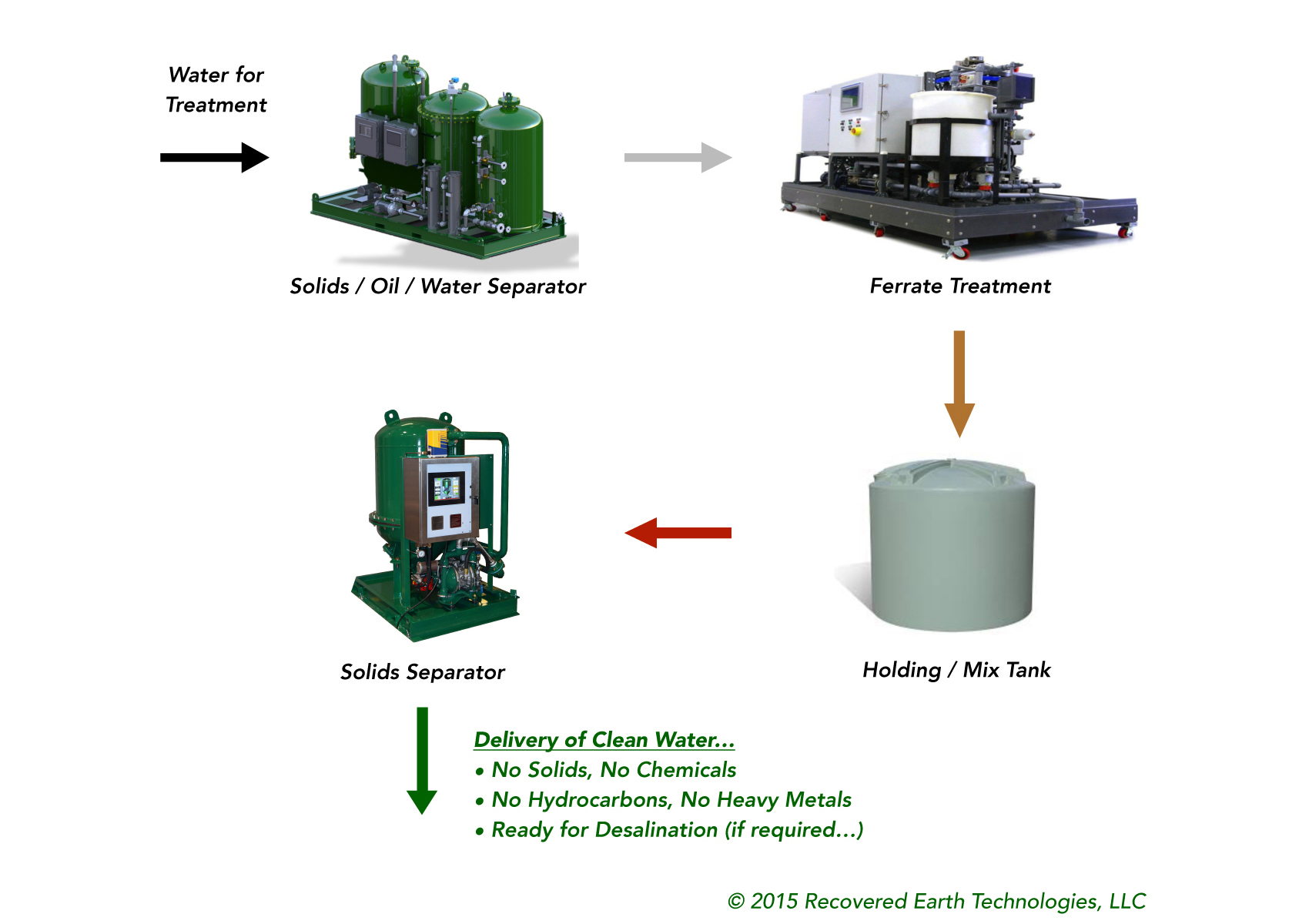 Used in phase II of the Water Treatment System, the Ferrate Treatment unit is a powerful, high-valant [FeO4]2- iron molecule that oxidizes process chemicals, disinfects pathogens and scale causing organisms, and coagulants or co-precipitates dissolved and particulate metals; all from a single dose. Ferrate is a supercharged iron molecule in which iron is in the plus 6 oxidation state; it is better known as Iron(VI). Ferrate is extremely powerful, can deliver multiple treatments from a single application, does not create disinfection byproducts, is environmentally friendly, and solves difficult treatment challenges that other oxidants can’t touch. Most importantly, Ferrate is often the least expensive and most effective treatment option.

In a single application, Ferrate can simultaneously perform as an oxidant, disinfectant and coagulant. Ferrate is more powerful than other oxidants such as ozone and chlorine dioxide. It can replace coagulants such as ferric chloride, alum and polymers for the removal of metals, non-metals and humic acids. It outperforms other disinfectants such as UV, hydrogen peroxide, and chlorine and can kill many chlorine resistant organisms such as aerobic spore-formers and sulphite-reducing clostridia. 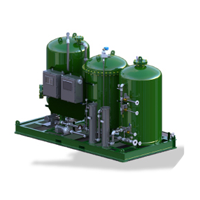 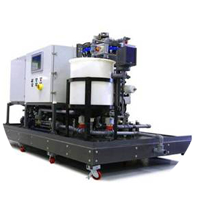 • Gravity Separation using NO Filters
• System can process water containing up to 60% Solids
• Removes Emulsified Oils from Process Water
• Separation down to 25 microns in a single pass without the use of Filters
• Separates out Hydrocarbons, Solids and Gas in same Vessel in the Same Pass
• Removed Solids are automatically discharged to a Filter Press for excess Water Removal

• Removes all TSS – Biological, Chemical and other impurities are removed from the Process Water
• Impurities are made into a Solid for ease of Separation
• All Removed Solids are Rendered Inert

• Effective on Produced Water, Rivers, Lakes, Chemical Plants and Agricultural applications.
• Cheapest initial Capital Investment as well as Operating Cost per cubic meter of any water treatment system available.
• United States EPA report shows that this is the cheapest and most effective water treatment solution in the world.
• Small footprint: 10’ x 35’ skid-mounted ready-to-run units.
• Portability: System can easily be moved from one site to another.
• Very low maintenance.
• Modular design: Additional systems can be added to meet any production requirement.
• Ease of operation: All system functions are controlled by PLC.